Red Blood Cells (RBCs) are perhaps the most recognizable component of whole blood.
RBCs contain hemoglobin, a complex protein containing iron that carries oxygen through the body. The percentage of blood volume composed of red blood cells is called the “Hematocrit.” There are about one billion red blood cells in two to three drops of blood, and for every 600 red blood cells, there are about 40 Platelets and one white cell.

Manufactured in the bone marrow, RBCs are continuously produced and broken down. They live for about 120 days in the circulatory system. Red blood cells are prepared from whole blood by removing plasma, or the liquid portion of the blood, and they are used to treat anemia while minimizing an increase in blood volume. RBCs may be treated and frozen for an extended storage, of 10 years or more. • Platelets are small blood components that help the clotting process by sticking to the lining of blood vessels. Platelets are made in the bone marrow and survive in the circulatory system.

• Platelets are prepared by using a centrifuge to separate the Platelet-rich plasma from the donated unit of whole blood.

• Platelets may also be obtained from a Donor directly by a process known as Apheresis, or Platelet Apheresis. In this process, blood is drawn from the Donor into an Apheresis instrument which separates the blood into its components, retains some of the Platelets, and returns the remainder of the blood to the Donor.

• This single Donor Platelet product contains about 6 to 8 times as many Platelets as a unit of Platelets obtained from whole blood.

• Platelets are used to treat a condition called thrombocytopenia, in which there is a shortage of Platelets, and they are also used to treat Platelet function abnormalities.

• Platelets are stored at room temperature with constant agitation for 5 days. 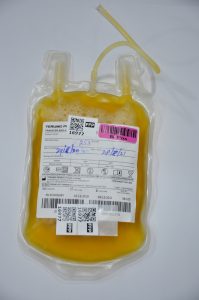 Plasma is the liquid portion of blood – a protein-salt solution in which red and white blood cells and Platelets are suspended. Plasma, which is 92% water, constitutes 55% of blood volume. Plasma contains albumin (the chief protein constituent), fibrinogen (responsible, in part, for the clotting of blood) and globulins (including antibodies). Plasma serves a variety of functions, from maintaining a satisfactory blood pressure and volume to supplying critical proteins for blood clotting and immunity. It also serves as the medium for exchange of vital minerals such as sodium and potassium and helps to maintain a proper pH (acid-base) balance in the body, which is critical to cell function. Plasma is obtained by separating the liquid portion of blood from the cells.

Plasma is frozen quickly after donation (up to 24 hours) to preserve clotting factors, stored up to one year, and thawed shortly before use. It is commonly transfused to trauma patients and patients with severe liver disease or multiple clotting factor deficiencies.

White blood cells (leukocytes) are one of the body’s defenses against disease. Some white cells travel throughout the body and destroy bacteria, some produce antibodies against bacteria and viruses, and others help fight malignant diseases. One’s own “leukocytes” help maintain the body’s immune function, but when present in donated blood, they serve no purpose. In fact, leukocytes may carry viruses that cause immune suppression and release toxic substances in the recipient. Leukocytes can cause a reaction when transfused, and are often removed from the transfusable blood components, a process called leuko-reduction. The majority of white blood cells are produced in the bone marrow, where they outnumber red blood cells by 2 to 1. However, in the blood stream, there are about 600 red blood cells for every white blood cell. There are several different types of white blood cells.

Granulocytes are one type of several types of white blood cells that are in fact used in more specialized transfusion therapy. Granulocytes and monocytes protect against infection by surrounding and destroying invading bacteria and viruses, and lymphocytes aid in the immune defense system. Granulocytes are prepared by an automated process called Apheresis, and must be transfused within 24 hours after collection. They are used for infections that are unresponsive to antibiotic therapy.